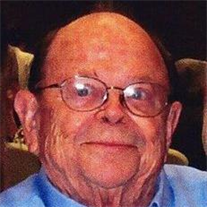 CLEVELAND- Ancil L. Cox, Jr., a Cleveland attorney for over half a century, passed away on Thursday, May 18, 2016, at the Bolivar Medical Center after a brief illness. He was 88.
Visitation will be Sunday, May 22, 2016 at 6 o'clock p.m. at Our Lady of Victories Catholic Church, with a rosary to follow at 7 o'clock p.m. His funeral mass will be held at 10 o'clock A.M. on Monday, May 23, 2016 at Our Lady of Victories Catholic Church in Cleveland.
A very proud native of Shaw, Mississippi, Mr. Cox was born on August 15, 1927. He was Valedictorian of his graduating class at Shaw High School in 1945, a fact he reminded his family and friends of quite often. He graduated from the University of Mississippi with his Bachelor of Arts in Political Science in 1948, and his Bachelor of Laws in 1951. At Ole Miss, he was a member of Phi Eta Sigma, Phi Delta Phi legal honor society, and Kappa Sigma fraternity. He began practicing law in 1951 with C.J. Craggs, and continued practicing in the same building at 116 S. Court Street until his retirement in 2014. He was the founding partner of Cox & Moore, PLLC, and enjoyed a rich and diverse legal career in Cleveland, practicing first with his first cousin, the late Dana C. Moore, and then later with his son, John C. Cox. Mr. Cox represented the Town of Shaw for over 30 years, and also served as counsel for the Cleveland State Bank for over 50 years. He was well-renowned in legal circles for his knowledge of real property and his love of the law, and prided himself on having the first law firm in Bolivar County that offered title insurance services. He was a tireless worker in the law office, and in the 1970's, Mr. Cox helped his childhood best friend and college roommate, Charles W. Dean, establish the Port of Rosedale, and he served as the Bolivar County Port Commission's attorney from its inception until 2015. He served as Co-Chair of the Great River Bridge Compact for numerous years after its creation, and was a tireless advocate for the construction of the Charles W. Dean Memorial Bridge after Dean's death in 1998. He was recognized by his peers as a Fellow of the Mississippi Bar Foundation, and received numerous legal honors throughout his career including a prestigious "AV" rating from the Martindale-Hubbell legal directory.
Mr. Cox was a member of the Cleveland Noon Lion's Club, Cleveland-Bolivar County Chamber of Commerce, Delta State Athletic Green and White Fund, and the University of Mississippi Alumni Association. He was a former board member of the Shaw Educational Foundation, Cleveland Country Club, and the Bolivar County Industrial Development Foundation.
He married Monica White Widdifield on May 7, 1972 and they spent a wonderful life together until her death in 2005. They raised three children, and worked together at his law firm where Mrs. Cox worked as his legal secretary for many years. He was a lifelong fan of Ole Miss sports, and loved to sit with his friend, David Work, in the Kroger deli on Sunday mornings and discuss the Ole Miss/Mississippi State football rivalry. He loved tennis, and passed on his love of the game to his youngest son, John.
He is preceded in death by his wife, Monica W. Cox, and his parents, Ancil L. Cox, Sr. and Christine Walker Calhoun.
He is survived by his daughter, Hillary C. Smith (Frank) of Starkville and his two sons, Kevin W. Cox (Anita) and John C. Cox (Ashley), both of Cleveland, as well as his grandchildren, Tripp Smith, Elizabeth Smith, Patrick Smith, MaryBeth Cox, Shelby Cox, John Christopher Cox, Jr. and Walker Cox.
Pallbearers will be Tripp Smith, Judson Thigpen, Aaron Lasker, Andy Mundy, Will Bradham and Ryan Akers.
Cleveland Funeral Home is in charge of arrangements. The on-line guest register may be signed at www.clevelandfuneralhome.net


To order memorial trees or send flowers to the family in memory of Ancil L Cox, Jr, please visit our flower store.