Visitation will be held Friday, July 24, 2020 from 5:00 PM until 7:00 PM at Cleveland Funeral Home. A celebration of life funeral service will be held at 10:00 AM Saturday, July 25, 2020, in the Cleveland Funeral Home Chapel. Burial will follow in the Linn Methodist Church Cemetery. Reverend Robert Haney will officiate the services.
Aubrey was born November 22, 1946, to Guy R. and Norma Jean Cone Corley in Shaw, MS. He was a Vietnam War Veteran who served in the 25th Infantry 2nd -22nd Battalion. He was stationed in Chu Che and Dow Thang Vietnam. He was a highly decorated soldier having received the Army Commendation Medal for Heroism, the Silver Star for Gallantry in Action, the Bronze Star Medal with "V" device for Meritorious Service in connection with military operations against hostile forces and was awarded two additional bronze stars with "V" device and Oak Leaf Clusters for Heroism. He was awarded the Purple Heart, National Defense Medal, US Vietnam Service Medal, Vietnam Campain Medal, the Combat Infantry Badge, and the Expert Marksman Badge.
Upon his return from the war, he began working in construction until he started working with Trunkline Gas Company in 1980 and, retired from Trunkline in 2003. He also enjoyed working on his farm. Aubrey married Violet Pope on November 19, 1982, at their home in Shaw.
He was preceded in death by his parents Guy Reddit and Norma Jean Corley, Sister, Shirley Jean Corley Gill, daughters in law, India Corley, and Leigh Anne Marquis.
Aubrey is survived by his wife of 37 years Violet Pope Corley of Shaw, MS. Three sons, Greg Corley, Kenneth Beevers (Robin), and William "Bill" Beevers.
Five granddaughters, Cloie Corley, Denise Beevers Hudson,(Chris), Brandy Beevers Loper, Brittney Beevers (Dale McCollum), and RaeAnne Beevers Dupee. Nine great-grandchildren, Adin Thuecks, Aly Thuecks, Aubrie McCollum, Savannah Richardson, Marshall Richardson, Ryan Smith, Austin Smith, Jacob Hudson, and Kameron Hudson. He also leaves a special friend Nathan Norquist.
Pallbearers are Chris Hudson, Dale McCollum, Nathan Norquist, Ryan Smith, Austin Smith, and Jacob Hudson. The honorary pallbearers will be the Trunkline Gas Co-Workers.
Memorials may be made to St Jude Children's Research Hospital 501 St Jude Place Memphis, TN 38501 or Interstate Baptist Church 948 Sandpit Road Shaw, MS 38773.

Cleveland Funeral Home is in charge of arrangements. The on-line guest register may be signed at http://www.clevelandfuneralhome.net.
Due to the COVID, -19 distancing restrictions will be in place and masks will be required at all services.

To plant memorial trees or send flowers to the family in memory of Aubrey Corley, please visit our flower store.

Aubrey was a wonderful friend and neighbor. He had a heart of gold and was always ready to help someone when they asked. He always had a smile and a hug ready for you. Fly high Aubrey, I will truly miss you. My prayers to Violet and the entire family during the sad and difficult days ahead.

Prayers for Violet and the family. RIP

As a young man growing up in the Interstate Baptist Church, we were all aware of Aubrey Corley and his visit to Vietnam. That possibility was in all our future. Only military personnel would understand the true significance behind all of the Medals Aubrey was awarded. Courage beyond human capacity. God was with him.
May we never forget what those Medals cost him. Like so many who went, they sacrificed their youth, their emotional balance, their outlook on life, their friends, and were placed in horrendous situations, not for a paycheck, but for the love of a nation. My hat is off to you, Aubrey Corley. As kids, we always spoke of you in glowing terms.

Prayers for Violet and the family. I will miss having Aubrey hugs!

Aubrey Corley was a hero. No actually he was a super hero. You see I know real heroes and super heroes. Heroes dont have numbers on their jerseys, they have medals on their chest. And Ive seen superheroes before and they dont wear capes, they wear dog tags. Yeah, Aubrey Corley was both. Lastly, you can always tell a coward from a hero when you see which way they run in times of crisis. Aubrey Corley never ran from anything.

Here in America we have become mesmerized by stardom. We glorify the professional athlete, the talented artist and the product of Hollywood. We use the word heroes in reference to them as if that word is a catch phrase for popularity. We even sometimes glamourize politicians and bestow that descriptive label on them as well. And we rarely stop to think what it takes to make a true hero. I believe the stark difference between popularity and true heroism is simply this: honor. It doesnt take honor to throw more touchdowns than anyone else, to win an academy award, record a hit song or survive the election process. That only takes talent and often times money. When a man enlists or is drafted into the military with the full knowledge that he is committing himself to a term of service that may very well require him to lay down his life, that takes honor. When he answers a call of duty knowing that he may be separated from his friends, his family and his home for months, for years or as long it takes to accomplish his mission that takes honor. He doesnt do it for the money, he doesnt do it for the medals and he doesnt do it for the fame. He does it because he has a sense of honor that is found in every soldier. Some people live their entire lives wondering if they ever made a difference in this world. Aubrey Corley never had that problem. Surely the word hero can be reserved for men such as him.

I have often heard it said that our veterans are our heroes. But what are heroes? They are ordinary people that do extraordinary things. They are no braver than any of us, but they are braver for five minutes longer. It has been said that without heroes we are all plain people and never know how far we can go or how much we can achieve. We have a tendency to think of heroes as the George Pattons, the Douglas MacArthurs, and Dwight Eisenhowers of the world. But those leaders, though they are truly heroes, will quickly tell you that it doesn't take a hero to order men into battle. It takes a hero to be one of those men who goes into battle. So, let us never forget the combat infantryman who fought the fight for freedom. Those that fought, not for fame or for glory, but because it was their duty and they did it well. The real heroes are the soldiers that didn't question their duty, but did it with honor simply because it was their job. The real heroes are those that paid the cost of freedom with their time, their blood, their sweat and certainly those that paid with their lives.

For many of these men the war lives with them the rest of their lives. They are unable to forget the things they saw while serving this country. They can never completely exorcise the demons of war, but somehow have learned to live in peace with them. Even so, in the dark recesses of their memories, they still hear the rattle of automatic weaponry, the thunder of the howitzer, the scream of the mortar and the mournful cries of the wounded. They still see the faces of the dead in their sleep and their silence is deafening. So never think for a single minute that a combat veteran did his tour of duty, came home and for him the war was over. They serve every day for the rest of their lives and their sacrifice for this country continues until they leave us, and so must our thanks.
We may never be able to thank each of them personally, but we must always remember them forever. I will always remember Aubrey Corley. He was a true American hero.
Judge Percy L. Lynchard, Jr.

A candle was lit in memory of Aubrey Corley 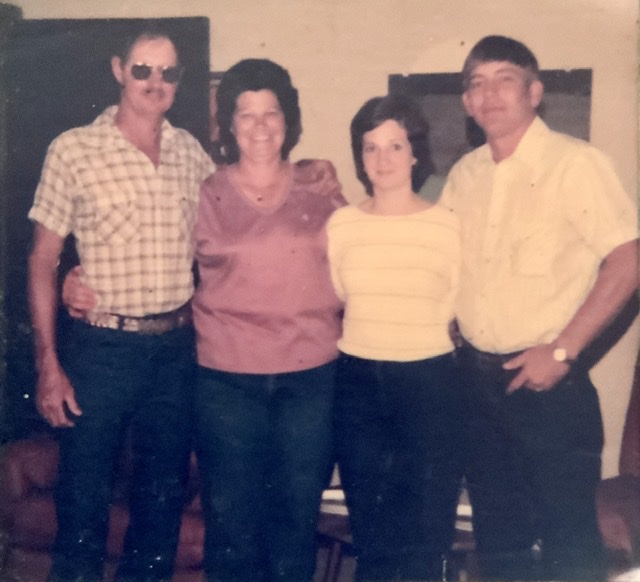