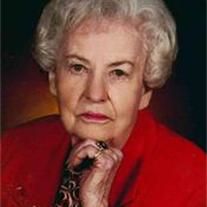 Avo Warren Boatright of Cleveland, MS died on Monday, September 19, 2011 at her home at the age of 93. She was born March 25, 1918, in Amarillo, TX to the late Riley Davidson Boatright and Carrie Isabelle Chandler Boatright. Her mother died when she was 14 months old and her father was thought to have been killed while working out of town around that same time so she was raised by her grandfather Charles R. Chandler and her step grandmother Bettie Gore Chandler who she always called "momma". When she was a young child the family moved to Mantee, MS where she was raised in a loving Christian home. She grew up with four first cousins who always treated her like a sibling and she remained very close with them throughout her life as they were the only family she had left. Avo moved to Cleveland, MS in the 40's and worked at The Modern Beauty Shop with some of her closest friends and business partners Mamie Barron and Mary Collins Hartley for 40 plus years. She continued to care for her grandparents until their deaths in 1949 and 1953. Avo dedicated her life to the Lord at the age of 12 and has always lived her life accordingly. She was a charter member of Immanuel Baptist Church in Cleveland where she worked in the nursery every Sunday for nearly 30 years. She loved her church and each of its members like they were her on family. She was committed to helping and caring for others. She loved tending to her yard and garden and was able to do so up until just a few years ago. Avo was always ready to go and loved to travel and she had the opportunity to do so numerous times to many places around the world well up into her 80's. It wasn't until the summer of 2005 that she learned she had two half siblings, Bernice (Carl) Collier of Emporia, KS and Lawrence (Mary) Leonard Boatright of Wellington, KS. Avo learned from her siblings that her father and been in a bad accident while working on the railroad and was unable to return to Amarillo right away and he realized he could not raise a young child alone and she was in a loving Christian home with her grandparents. Her father died in June of 1959. Both of her siblings had grown up knowing about Avo and had even tried to contact her many years later but they were unaware of her family's moved from Texas to Mississippi so they did not know where to look. Avo is preceded in death by her parents, her half-brother Lawrence Leonard Boatright of Wellington, KS, a first cousin Elmer T. Gwin of Arkansas City, KS and a second cousin Brian Douglas McVay of Arkansas City, KS. She is survived by her half-sister Bernice (Carl) Collier of Emporia, KS, three first cousins Roy L. (Berdelle) Williams of Okeechobee, FL, Christine Allen of Ardmore, OK, and Sallie (Damon) McVay of Arkansas City, KS. Her sister in law Mary Boatright of Wellington, KS, four nieces, Donna (Rick) Sayler of Williamsburg, MI, Nancy Boatright Staley of Wellington, KS, Janet Boatright Shockley of Edmond, OK, Brenda Boatright Sniezek of Prairie Village, KS, two nephews, Gary (Becky) Collier of Traverse City, MI and Craig Boatright of Wellington, KS, 15 great nieces and nephews and 11 great great nieces and nephews. Special friends the late Hal Kirk, Mary Kirk, Stacie, Jim and Chandler Harris, of Cleveland, Allison, Kevin McCormick and Zac Harris of Southaven, MS, Rebecca Anderson of Cleveland, Robert, Tammie and Gates Kirk of Starkville, MS and numerous friends and distant family that she loved and cherished equally the same. Words cannot explain how vested she was in each one of these personal relationships. Funeral services will be 1:00pm Friday, September 23, 2011 at Immanuel Baptist Church in Cleveland, MS with Reverend Tommy Arinder and Reverend Steve Huber officiating. Visitation will be from 12:00pm to 1:00pm at the church. Internment will follow at the North Union Cemetery in Bellefontaine, MS under the direction of Cleveland Funeral Home. Pallbearers are Robert Kirk of Starkville, MS, Jim Harris of Cleveland, MS, Kevin McCormick of Southaven, MS and Gary Galloway of Cleveland, MS. Honorary Pallbearers are her second cousins, Larry Wells of Ardmore, OK, Marcia Carroll of Ardmore, OK, Susan Wells of Oklahoma City, OK, Liz McVay of Kansas City, MO, Richard Lee Williams of Tallahassee, FL, Michael Gwin Williams of Okeechobee, FL, Scott Wells of Moore, OK. Memorials may be made to Immanuel Baptist Church, 1300 Lamar StreetCleveland, MS 38732. Online guestbook may be viewed and signed at www.clevelandfuneralhome.net

To order memorial trees or send flowers to the family in memory of Avo Boatright, please visit our flower store.