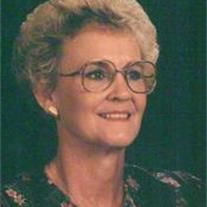 Barbara Ann Boswell Harden, age 73, of Cleveland, went to be with her Lord on Friday August 16, 2013 at the North Sunflower Hospital in Ruleville.

Barbara was born on May 25, 1940 to Claude and Lillian (Flint) Boswell.  She was a dental assistant in Louisiana and had been a dental hygienist for Dr. Raanne Tindle for many years until her retirement. She married G.R Harden February 16, 1993.   Barbara was a wonderful cook. Dinner on the ground at Morrison Chapel Baptist Church will not be the same without her amazing banana pudding.  Barbara was an amazing woman always willing to volunteer in every function of her church. She was a loving and devoted mother and grandmother who loved spending time with her grandchildren and will be greatly missed by her many friends, church and family.   She was preceded in death by her parents.

To order memorial trees or send flowers to the family in memory of Barbara Harden, please visit our flower store.