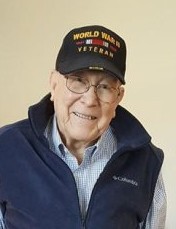 CLEVELAND - Bennie L. Hood, age 93, of Cleveland, Mississippi passed away on Wednesday, December 26, 2018 at the Indywood Estates in Cleveland.

Mr. Hood was born on July 10, 1925 to William Thomas and Classie Diana (Bowen) Hood on the Smith Plantation in Bolivar County, Mississippi. After high school Bennie joined the United States Navy. He fought in World War II and was a very proud Seaman 1st Class.  Upon being discharged from the Navy he married Sylvia Poe Hood.  He worked with Baxter Laboratories for 32 years as a mechanic. After his retirement Bennie remained very active, he was the Director of Bolivar County Civil Defense Department, worked as an EMT, security guard for Dixie Tabacco and was a volunteer along with his wife Sylvia for the Pioneer of America with Bell South. Bennie enjoyed hunting, fishing, gardening and could repair most anything. He enjoyed spending time with the family he loved so dearly. Bennie had a very outgoing bubbly personality never meeting a stranger all the while sharing his war stories and funny tidbits. Serving his Country was one of his proudest moments which made him one of the most Patriotic people in town, he loved his County. Bennie's accomplishments didn't stop there though, he was a member of Calvary Baptist Church, a Life Member of the American Legion and a Gideon.

Cleveland Funeral home is in charge of arrangements. The on-line guest register may be viewed and signed at www.clevelandfuneralhome.net

To order memorial trees or send flowers to the family in memory of Bennie L. Hood, please visit our flower store.