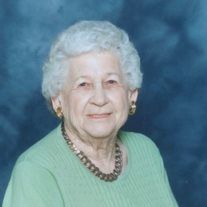 CLEVELAND - Bernice Stinson Oswalt, age 90, of Cleveland, passed away on Sunday February 09, 2014 at the Indywood Estates in Cleveland.
Visitation will be held Thursday February 13, 2014 from 12:00 PM - 1:45 PM at Immanuel Baptist Church. Funeral Services will follow at 2:00 PM at Immanuel Baptist Church. Dr. Steve Huber and Reverend Jimmy Breland will officiate the service. Burial will be at Odd Fellows Cemetery in Greenwood, Mississippi.
Bernice was born on February 07, 1924 to Curtis and Ruby (Fraizer) Stinson in Greenwood, MS. She attended Greenwood Public Schools and Mississippi Delta Junior College in Moorhead. Bernice went to work for Illinois Central Railroad in 1944. She was the Cleveland Depot director for 40 years until her retirement in 1985. She was very active in the community by giving of her time as a member of the Business and Professionals Women's Club, the Garden Club, a volunteer at the Bologna Performing Arts Center and a poll worker for elections. She also enjoyed water aerobic at Delta State University of which she had attended for over 20 years. Bernice was a very active member of the First Baptist church in Cleveland.
She was preceded in death by her parents, brothers Lloyd H. Stinson and Curtis Austin Stinson, Jr. Three Sisters; Marguerite McWhorter, Jeanette Dunn and Elizabeth Stinson.

Memorials may be made to First Baptist church of Cleveland or to the Disabled American Veterans Org. www.dav.org P O Box 14301 Cincinnati, Ohio 45250.
Cleveland Funeral Home is in charge of arrangements. On-line guest register may be signed at www.clevelandfuneralhome.net


To order memorial trees or send flowers to the family in memory of Bernice Stinson Oswalt, please visit our flower store.