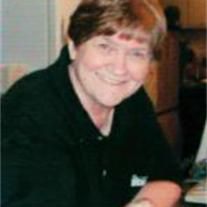 Betty Sue Talley Outlaw, age 65, of Cleveland formerly of Merigold, and Helena, AR died on Saturday December 11, 2010 at the Baptist Memorial Hospital in Jackson.  She was born on March 26, 1945 to David and Lucille (Kimbel) Buie and at the age of 6 weeks she was placed in the loving home of Robert and Cora Talley of Helena, AR, where she remained throughout her childhood. She attended Jefferson Elementary School and Helena Jr. High School. She was a member of the Church of God in West Helena, AR. She married Lester Peeples of Helena and they had four children and later divorced. In 1975 she married Jerry Outlaw. They owned and operated Outlaw's Family Restaurant for 13 years after selling the business she was employed at the Dessert Inn Steak House in Cleveland since April of 2004. She loved people, animals and computers. A memorial Service will be held Saturday December 18, 2010 2:00 PM at Cleveland Funeral Home.  The family will receive friends from 1pm until 2pm memorial service She is survived by Husband of 35 years, Jerry Flint Outlaw of Cleveland, MS.   Three sons, Terry Wayne Peeples of Houma, LA, Paul Edward Peeples of Houma, LA and Joe Outlaw (Cheryl) of Torrence, CA. Four Daughters, Judy Carol Peeples of Little Rock, AR, Brenda Davenport of Cleveland, MS, Gerrie Outlaw of Torrance, CA and Ginger Sutton of Jupiter, FL.  Brother, Robert Talley (Betty) of Memphis, TN.  Step-sister, Brenda Werner of Festus, MO.  14 grandchildren and 14 great grandchildren. She was preceded in death by her parents and biological parents. Step-father Bill Kimbel, two sisters Earlene White and Elaine Buie, brother David Talley Buie and step- brother Gene Kimbel.
Cleveland Funeral Home is in charge of arrangements.

To order memorial trees or send flowers to the family in memory of Betty Outlaw, please visit our flower store.