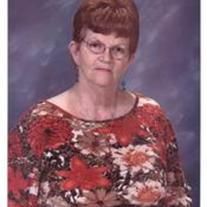 Billie Sue Allen Baker, age 66, of Cleveland formerly of Greenville , passed away on Thursday April 05, 2012 at the Methodist University Hospital in Memphis , TN. Visitation will be held Monday April 9, 2012 from 5:00 PM to 7:00 PM at the Cleveland Funeral Home in Cleveland .  Celebration of Life service will follow at 7:00 PM in the Cleveland Funeral Home Chapel. Rev. John Thomas will officiate the service.  Billie was born on October 25, 1945 to Bill and Ester (Shaw) Allen in Charleston , MS .  She attended school in Charleston . She had lived in Shaw for a number of years before moving to Greenville where she worked at the Gypsum Company, Whitt's Pet Grooming and Dr. Nordan's Greenville Animal Clinic before opening her own pet grooming and breeding business.  Billie's Pet Salon was her passion for over 30 years. She was a caring person and showed her love to many by giving of her time as a facilitator of Alcohol Anonymous; she had lead many meetings and ministered to the many that came to the meetings. She was currently a volunteer worker at K-9 Connection. She was a former member of Emmanuel Baptist Church in Greenville and currently a member of Morrison Chapel Baptist Church in Cleveland . Billie was a loving mother and grandmother and will be missed by many. She was preceded in death by her parents and two brothers. She is survived by Daughter, Kellye (Scott) Lanford of Merigold, MS. Son Perry Nelson of PA, Three Granddaughters, Amber Yates of Cleveland, MS, Whitney and Casey Lanford of Merigold, Two Great Grandchildren Hunter and Brayson Yates of Cleveland, MS. Memorials may be made to the Bolivar County Human Society P O Box 1995 Cleveland, MS 38732. Cleveland Funeral Home is in Charge of arrangements.

To order memorial trees or send flowers to the family in memory of Billie Baker, please visit our flower store.