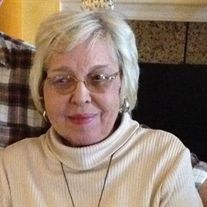 CLEVELAND - Carolyn Robertson Potter, age 78, of Cleveland, MS, passed away on Monday October 12, 2015 at the Baptist Hospital East in Memphis, TN.
Visitation will be held Thursday October 15, 2015 from 10:00 AM to 11:00 AM at Cleveland Funeral Home in Cleveland. Funeral Services will follow at 11:00 AM in the Cleveland Funeral Home Chapel. Burial will be at the Delta Heights Memorial Gardens. Reverend Jimmy Breland will officiate the service.
Carolyn was born on August 24, 1937 to Houston and Anita (Thomas) Robertson in Neshoba County, Mississippi. She moved to Cleveland at the age of 12. She graduated Cleveland High School in 1955 and attended Delta State University. Carolyn worked for several area businesses, The Bank of Cleveland, Crutcher Motor Company, Layne Central, Simmons& Belk and Color Tile. She was also a former burial insurance sales person. Carolyn was married to the late Paul J. Potter for 17 years. She was a member of the Cleveland Church of Christ, Carolyn loved her canine friend Iggy and she also enjoyed getting together with her 1955 class mates. She was preceded in death by her parents Houston and Anita Robertson and husband Paul Joseph Potter.


To order memorial trees or send flowers to the family in memory of Carolyn Robertson Potter, please visit our flower store.