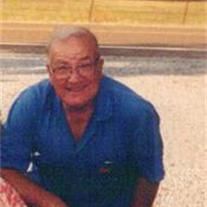 Cecil Wesley Ledford, Jr. "Dick" age 84 passed away Friday October 4, 2013 at Alliance Specialty Hospital in Greenville.
Visitation will be 2:00 PM Sunday October 6. 2013 at the Cleveland Funeral Home. Funeral Service will follow at 3:00PM in the Cleveland Funeral Home Chapel. Burial will be in the Shaw Cemetery. Pastor Phyllis Milan will officiate the service.
Cecil was born October 12, 1928 to Cecil Wesley and Abbie Lee Smith Ledford. He married Barbara Smith on June 25, 1949 in Cleveland ; MS. Cecil was a weaver and start up man at Greenville Mills. He worked there from 1956 until his retirement. Cecil loved working in the garden that he had every year and when he could he loved to fish. He was preceded in death by his parents, two daughters; Bobbie Sue and Linda Tidwell, Three sisters; Frances Bailey, Edna Herbert and Maxine Herbert and one grandson Stanley Ledford, Jr.
Cecil is survived by his wife of 64 years Barbara Smith Ledford of Merigold, One daughter, Dixie Shurden of Merigold, Two sons; Stanley (Doris) Ledford of Merigold and Dean Ledford of Cleveland . 5 grandchildren, 18 great grandchildren and 4 great great grandchildren. Pallbearers are Bobby Ledford, Jr., Chase McCool, Will Johnston, John Thompson, Nathan McDaniels and Shane Manzo.
Cleveland Funeral Home is in charge of arrangements.

To order memorial trees or send flowers to the family in memory of Cecil Ledford, please visit our flower store.