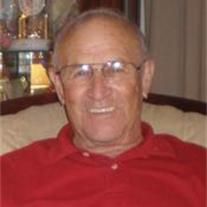 Charles G. Beck, age 76, of Cleveland, passed away on Wednesday July 06, 2011 at his home.  He was born on January 05, 1935 to Edward and Juliette (Hajjar) Beck in Borne, MA. Mr. Beck spent his early years in Narragannesette, RI before enlisting in the United States Air Force. He was a Korean War Veteran serving from 1952- 1956 after the war he was placed at the Greenville Air Force Base it was there he met and married Diann Lemonds on March 05, 1968.  In 1969 he began his career at Kossman's Body shop managing the shop for over 30 years. Mr. Beck was a 55 year Life Member of the Glen Crosby American Legion Post and a member of VFW Post 4800. Mr. Beck was a Patriot and Countryman who at every occasion given supported our military and veterans. His hobbies included collecting a die cast cars, listening to Country and Gospel songs, spending time with and cooking Sunday dinner for his family. He was Christian and gave to many charities of worthy cause. He was preceded in death by his parents, a brother Edward Hamilton Beck, and a grandchild Brandy Godwin.  Visitation will be held Thursday July 7, 2011 from 6PM ~ 8PM at Cleveland Funeral Home.    Funeral Services will be held 10:00AM Friday July 8, 2011 at the First Church of the Nazarene in Cleveland.  Burial will follow at the North Cleveland Cemetery with Reverend Steve Holtz conducting the services.  He is survived by Wife, Diann L. Beck of Cleveland, MS. Daughter Lisa Beck Phillips of Lake Village, AR, Daughter Angela "Charlie" Beck Bradshaw of Cleveland, Son Kevin L. Beck and wife Andrea of Merigold, Son Heath Beck and Wife Brandy of Cleveland, Daughter Judy Beck Godwin of Iowa, Son Charles Beck, Jr. of Mt. Herman, LA, Daughter Amy Beck Hazzard of Greenville, Son Chester Beck of Greenville, Three Sisters; Judy Beck and Laura Beck Turner both of LaMasse, CA, and Frances Sheehan of Honesdale, PA.  26 Grandchildren and 26 great grandchildren. Pall-Bearers are Joe Garcia, Don Cabrol, Lance Jackson, Danny Melton, Roger McClain and Dennis Winters. Honorary Pall-Bearers are Perry Morgan, Bobby Morgan and members of the Glen Crosby American Legion Post 165 and VFW Post 4800. Cleveland Funeral Home is in Charge of arrangements. On-line guest register may be viewed and signed at www.clevelandfuneralhome.net

To order memorial trees or send flowers to the family in memory of Charles Beck, please visit our flower store.