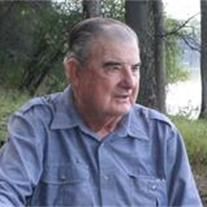 Charles L. Horn, age 80, of Boyle, MS passed away on Monday, November 21, 2011 at the Baptist Memorial Hospital. He was born on December 23, 1930 to Willie Watson and Leone (Chambers) Horn in Hillsboro, MS. Mr. Horn went to work at the age of 18 with what is now known as AT&T. He remained employed with AT&T for 39 years, having started his career in Greenville, MS before being transferred to Cleveland, MS in 1969. He was a US Army Veteran who served during the Korean War and was a past Executive Board Member for the Mississippi Telephone Pioneers. Mr. Horn loved the outdoors and was an avid sportsman, a former president of Huntington Point for 12 years, and a member of the Beulah Fishing Club and Benoit Outing Club. He was a member of the American Legion and First Baptist Church of Boyle, where he was a retired Deacon. He was a loving husband, father and grandfather.     Visitation will be Wednesday, November 23, 2011, at Cleveland Funeral Home from 12-2 p.m. The funeral services will follow at 2 p.m. at the Cleveland Funeral Home Chapel, with Reverend Clarence Edwards officiating. Burial will follow at the North Cleveland Cemetery. Pallbearers are sons and grandsons Chuck Horn, Lexie Horn, John Horn, Creede Simpson, Chase Horn and Lex Horn. Honorary pallbearers are grandsons Eric Horn and Peyton Horn, as well as the Deacons at First Baptist Church of Boyle.     He is survived by his wife of 62 years, Mary Jane Ramsey Horn of Boyle, MS; daughter, Cathy Horn Simpson (Gene) of Auburn, AL; three sons, Chuck Horn (Harriet) of Los Gatos, CA, Lexie M. Horn (Cindy) of Cleveland, John A. Horn (Lisa) of Boyle; sister, Gladys Arinder of Morton, MS; eight grandchildren, Kate Simpson of Huntsville, AL, Creede Simpson of Auburn, AL, Chase and Eric Horn of Los Gatos, CA, Hayley Horn of Jackson, MS, Lex Horn of Cleveland, Lacie Horn of Cleveland and Peyton Horn of Boyle.     Memorials may be made to the Bolivar County Fire Department, P.O. Box 538, Cleveland, MS 38732 and the Mississippi Fire Fighters Memorial Burn Association, 161 Pine Ridge Circle, Brandon, MS 39047. Cleveland Funeral Home is in charge of arrangements.

To order memorial trees or send flowers to the family in memory of Charles Horn, please visit our flower store.