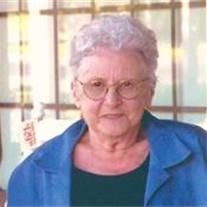 POPE - Cleo Rae McKnight Westbrook, age 84, of Pope, formerly of Shelby went to be with her Lord and Savior on Monday June 03, 2013 at her home.  She was born on December 03, 1928 to Robert Gary and Mary (Agner) McKnight in Shelby, MS.  She graduated Shelby High School in 1946. She married Richard Alton Westbrook, Sr. on September 1, 1946. She was a former bank teller for the Bank of Bolivar County for many years. Mrs. Westbrook was a very active member of Belleview Baptist church in Shelby for many years. After retirement she moved to Pope MS and there she renewed her active church work at Enid Lake Baptist Church.  Mrs. Cleo enjoyed sewing and making clothes for children; she was an awesome cook and was always willing to entertain pastors and visiting evangelist. Her home was always filled with laughter and love and an open door to her children's friends and her friends. Mrs. Cleo's children can rarely remember a time on Sunday when there was not a minister and family at their home to eat. She always had a smile that showed her love for God and family. She was a loving and giving wife, mother and grandmother.

She was preceded in death by her parents, husband, grandson, Brian Patterson, son-in-law, John G. Whatley and a niece, Salley Ship.

To order memorial trees or send flowers to the family in memory of Cleo McKnight Westbrook, please visit our flower store.