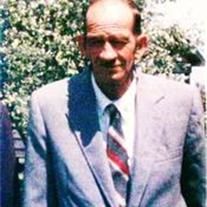 David A. Jones, age 69, of Cleveland, passed away on Friday March 08, 2013 at his home.  Visitation will be held Monday March 11, 2013 from 1:00 PM to 2:00 PM at Cleveland Funeral Home in Cleveland.  Funeral Services will follow at 2:00 PM in the Cleveland Funeral Home Chapel.  Burial will be at the Lehrton Cemetery Ruleville, MS. Rev. Larry Chouccoli will officiate the service.
David was born on May 09, 1943 to David and Mattie (Skinner) Jones, Sr. in Sunflower County. He was a life long resident of Sunflower County. David graduated from Linn Schools and immediately joined the United States Army. He was a Vietnam War Veteran. After his tour in the Army, David went to work for Logan Charter Services in Greenville where he worked his way up from deck hand to engineer. David was a member of the American Legion and Dockery Baptist Church. He was preceded in death by his parents, brothers; Jack Jones and Robert Louis Jones, two sisters; Martha Jane Jones Pate and Francis Jones Prewitt.

To order memorial trees or send flowers to the family in memory of David Jones, please visit our flower store.