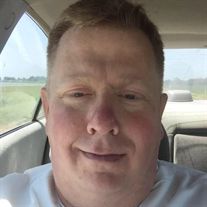 Dennis was born on July 05, 1969 to Jessie and Patsy (Compton) Hendrix in Brinkley, AR. He was 1987 Cleveland High School graduate and had attended Delta State University. He was a Mississippi Delta Junior College LPN School of Nursing graduate. Dennis was a Gulf War Army Veteran having served in Iraq for two tours and Bosnia. He continued to serve his Country in the National Guard Reserve. Dennis was a member of Morrison Chapel Baptist Church. He enjoyed bowling and collecting guns. Dennis loved his children and family and had a big heart for others.
He was preceded in death by his mother Patsy Compton Hendrix, maternal grandparents R C and Estelle Compton, paternal grandparents Jesse and Ida Hendrix.

Cleveland Funeral Home is in charge of local arrangements. The on-line guest register may be viewed and signed at www.clevelandfuneralhome.net


To order memorial trees or send flowers to the family in memory of Dennis D. Hendrix, please visit our flower store.