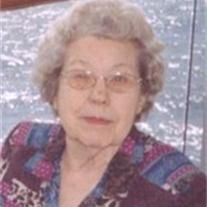 Dollie Henderson East, age 93, of Cleveland, MS, died on Thursday August 20, 2009 at the Bolivar County Medical Center Long Term Care in Cleveland. She was born on January 27, 1916 to James and Beulah (Ray) Henderson in Choctaw County, MS. She was a retired Telephone Company employee where she was assistant chief operator for many years. Mrs. East was a graduate of Mississippi Delta College. She was a member of the Telephone Pioneers and First Baptist Church of Cleveland. Mrs. East loved to travel and had visited many countries. Visitation will be Saturday 8-22-2009 from 9AM ~ 9:45AM at Cleveland Funeral Home. Graveside funeral Services will be held Saturday 08/22/2009 10:00 AM at New Cleveland Cemetery in Cleveland, MS. The Rev. Milton Byrd will officiate the service. Mrs. East was preceded in death by her husband Elmo East, parents James and Beulah Henderson and two sisters; Bervie Vaughn and Louise Henderson. She is survived by Step-son Charles and wife Sarah East of Baton Rogue, LA, Step-Grandson Charlie East of Baton Rogue, LA, Great Nephews, Eric Vaughn of Ruidoso, NM. and Michael Woolfolk Vaughn of St. Louis, MO. Great Niece Lindsey Vaughn of Ruidoso, NM and special friend and caregiver Ann Frazier of Cleveland, MS. Cleveland Funeral Home is in charge of arrangements.

To order memorial trees or send flowers to the family in memory of Dollie East, please visit our flower store.