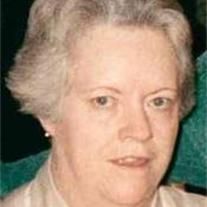 Dorie Brasher Robb, age 81, of Cleveland, passed away on Tuesday September 20, 2011 at the Bolivar Medical Center.  She was born on August 11, 1930 to John E. and Sallie (Cox) Brasher. Mrs. Robb grew up in the Alva Community and graduated Alva Schools in 1949. She married Charles A Robb on June 07, 1951 in Cleveland, Ms at First Baptist Church.  She was a former quality technician for Baxter Laboratory for 32 years. She was a member of Morrison Chapel Baptist Church.  She was a loving wife, mother, grandmother, great grandmother and friend. Mrs. Robb was preceded in death by her parents and a brother Charles E. Brasher.  Visitation will be held Thursday September 22, 2011 from 12:00 PM to 2:00 PM at the Cleveland Funeral Home.  Funeral services will follow visitation at 2:00 PM in the Cleveland Funeral Home Chapel.  Burial will be at the North Cleveland Cemetery. Reverend John Thomas will officiate the services.   She is survived by Husband of 60 years, Charles A. Robb of Cleveland, MS.  Son, James and wife Janice Robb of Springfield, VA.  Son, Keith and wife Lisa Robb of  Cleveland.  Daughter, Melissa Robb Dyche of Cleveland, MS.  Daughter, Angela Robb and husband Mac McNeer of Cleveland.  Sister, Anita B. Jennings of Cordova, TN.  8 Grandchildren and 6 Great Grandchildren. Pallbearers will be Jamey Smith, Andy Pearson, Brasher Robb, Matthew Robb, Jonathan Chisolm, Leonard Robb, Zac Tollison and Nick Wilson. Memorials may be made to the Morrison Chapel Baptist Church Building Fund. Cleveland Funeral Home is in charge of arrangements.

To order memorial trees or send flowers to the family in memory of Dorie Robb, please visit our flower store.