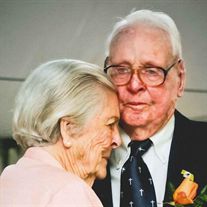 Mr. Williams was born on December 29, 1919 to Edgar D. and Cammie (Ingram) Williams in Indianola, MS. He accepted his Savior in 1932 and was baptized at Steen Creek in Florence, MS. He joined the United States Army Air Corps January 1, 1942. He was in the 445 Ordinance attachment 69 B Squad. He saw service during WW II on Guadalcanal, New Georgia, Russal, Woodlark Island, Bougainville Island and Port Mosley New Guinea. He was discharged August 12, 1945 with the rank of Master Sergeant.
Mr. Edgar was a member and deacon of First Baptist Church Ruleville. He was a lifetime member of the VFW, American Legion. He had served as Secretary and President of the Lions Club in Ruleville, and Secretary and President of the Rotary Club in Ruleville. He had served on the board at the Chamber of Commerce Ruleville. Mr. Williams served as Alderman for 14 years and was Vice Mayor of Ruleville for 4 years. He worked as a rural mail carrier from 1947-1982. He was owner of the Standard Service Station in Ruleville and part owner of 2 coin operated laundries. He retired in 1983.
Mr. Williams enjoyed life with his wife and sons and enjoyed spending time with all his grandchildren. He also enjoyed hunting, fishing, golfing and tennis.
He was preceded in death by his parents, Edgar D and Cammie Ruth Williams, his wife of 67 years Martha Jane Polk Williams, Three Sisters Ruth Gray, Bernice Morgan, Pauline Robinson, and a brother Prentiss Williams.

Memorials may be made to First Baptist Church P O Box 187 Ruleville, MS 38771


To order memorial trees or send flowers to the family in memory of Edgar D. Williams Jr, please visit our flower store.