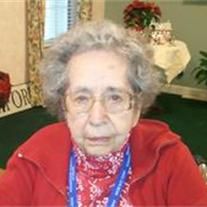 Edna Olene Reed, age 90, of Hazlehurst formerly of Cleveland, passed away on Tuesday, February 26, 2013 at the Pine Crest Guest Home in Hazlehurst.  She was born on March 24, 1922 to Doc Eli and Edna Pearl (Williams) Garrett in Wichita Falls, TX.  Olene graduated Boyle Schools. She married Joseph Howard Reed in 1942.  Olene worked in the family business; Reed's Auto Salvage for many years. She was also former office manager for North Mississippi Savings and Loan before her retirement. She was a member of the First Baptist Church where she assisted in the Wednesday night family meal. Olene was also was a volunteer at the hospital and library. She was a member of the local camping club. Olene was an avid reader and a very good seamstress. She was a supportive loving wife, mother and grandmother. Olene was preceded in death by her parents, husband, daughter, Diane Stewart, son, Howard Reed, Jr and a grandson, Warren Reed.
Visitation will be held on Wednesday February 27, 2013 from 1:00 PM to 1:45 PM at the Cleveland Funeral Home in Cleveland.  Graveside funeral Services will follow at 2:00 PM at New Cleveland Cemetery. Rev. Macklyn Hubble will officiate the service.
She is survived by Daughter, Linda Hill of Hazlehurst, MS. Daughter-in-law Donna Reed of Oxford, MS. Sister-in-law Louise Garrett of Cleveland, MS.  Grandchildren; Aaron Hill of New York City, Justin (Jane) Hill of San Francisco, CA, Audrey Stewart of New Orleans, Jessica Stewart of NY, Matthew Reed of Thibodeaux, LA and David Reed of Eugene, OR, 11 Great grandchildren and a host of nieces and nephews.
In lieu of flowers memorials may be made to Gateway Rescue Mission 328 S. Gallatin St. Jackson, MS 39203.

To order memorial trees or send flowers to the family in memory of Edna Reed, please visit our flower store.