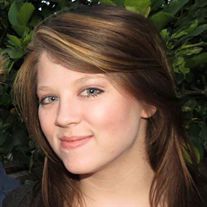 Emily Peyton Read Williams,age 23, passed away in Houston, TX on March 23, 2015. Visitation will be held at Cleveland Funeral Home on March 31st, 2015 at 5:00 with a memorial service to follow at 6:00. Reverend John Arthur Thomas will officiate the service.
Emily was born on December 27, 1991 in Houston, Texas to Wesley Read and Tina Johnson. She moved to Mississippi in 2007 and graduated from Cleveland High School in 2010. She married William Thomas Williams on July 10, 2010.
She is survived by her husband, William Thomas Williams of Malvina, MS, a son, Wesley Jackson Williams, her father and stepmother, Wesley and Ronda Read of Cleveland, mother, Tina Johnson of Spring, Texas, a step-father, Paul Thacker of Spring, Texas, two sisters, Chelsea Arrington (Adam) and Isabel Thacker, both of Spring, Texas, and a brother, Michael Read. She also leaves her grandparents, Ronnie and Judy Mosley of Cleveland, her mother and father in law, Ronny and Becky Beevers of Rosedale, two special neices Ciercy Holcomb and Joely Holcomb, and, and a host of other friends and family.


To order memorial trees or send flowers to the family in memory of Emily Peyton Read Williams, please visit our flower store.