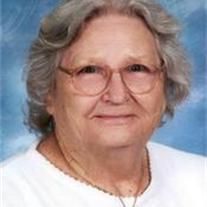 Eunice E. Denley Mckee, age 86, of Lobelville, TN died on Monday September 26, 2011 at her residence.  She was born on October 11, 1924 to Thomas and Linnie Mae (King) Denley.  Mrs McKee was born in Charleston, MS and attended Charleston Schools. She married the late Eddie Daniel McKee  together they raised 6 children. Mrs, McKee's babysitter was her cotton sack dragging her children with her while she worked to sustain her family. Mrs. McKee was a former Shelby Die-casting employee for many years until moving to Pearl in 1999 to assist her sisters. She was a member of Paul Truitt Baptist Church in Pearl, MS. She was a unselfish person always taking care of others.  She had a heart of gold and was a wonderful cook.  She was preceded in death by her parents, husband,  two brothers Lawrence and George Denley and a sister Velma DenleyVisitation will be held Wednesday September 28, 2011 from 12:00 PM to  2:00 PM at the Cleveland Funeral Home in Cleveland, MS  Funeral Services will  follow at 2:00 PM at Cleveland Funeral Home Chapel. Interment will be at the Shelby Cemetery. Reginald Finch will officiate the service. She is survived by Son, A. D. (Barbara) McKee of Holcomb, MS.  Daughter, Margie McCune of Lobelville, TN.  Son, Tom (Elba) McKee of Cleveland, MS.  Daughter, Glinda (Larry) Coats of Moorhead, MS.  Daughter, Pat (Raymond) Hamilton of Lexington, TN.  Son, J D McKee of Louisville, MS.  Brother, Edgar Denley of Jackson, MS.  Brother, Joe (Betty) Denley of Pearl, MS.  Brother, Robert (Paula) Denley of Terry, MS.  Two sisters, Dorothy (Otho) Derrick of Pulaski, MS and Mary Eubanks of Lobelville, TN. 19 grandchildren, 19 great grandchildren and 1 great great grandchild and a host of nieces and nephews.Pallbearers are Brian McCune, Ray Carl Hamilton, Joe Garza, David McKee, Wayne McKee and Wyatt McCune.Cleveland Funeral Home is in charge of arrangements.

To order memorial trees or send flowers to the family in memory of Eunice McKee, please visit our flower store.