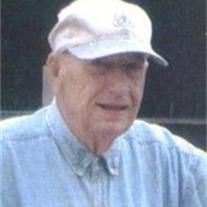 Everett T. Pearcy, age 85, of Cleveland, died on Tuesday August 25, 2009 at Bolivar County Medical Center. He was born on December 26, 1923 to George and Ottie (Turnbow) Pearcy in Biggers Arkansas. He married Faye Raney Pearcy on July 31, 1954 in Boyle, MS. Mr. Pearcy served in the 529th Bombardment Squadron of the United States Army Air Corps during WW II, working radio and radar equipment. He attained the rank of Sergeant. In 1955 he began a 26 year career as an accountant and finance officer for the US Civil Service. After retirement, Mr. Pearcy served as the bookkeeper for Bolivar County for several years. For the next 20 years he worked alongside his wife in their plant business. He was a former Lion's Club member in Columbus, MS, having served as a past president. Mr. Pearcy was preceded in death by his parents, two brothers; Orville and Joe Pearcy and Son; Chris.
Visitation will be held from 08/26/2009 06:00 PM to 08:00 PM at Cleveland Funeral Home in Cleveland. Graveside funeral Services will be held Thursday 08/27/2009 02:00 PM at North Cleveland Cemetery in Cleveland, MS. Burial will be at the North Cleveland Cemetery on 08/27/2009 02:00 PM. The Rev. James Lindsey and Rev. Steve Holtz will officiate the services. He is survived by his wife of 55 years Faye Raney Pearcy of Cleveland, two sons; Randy and wife Wanda Pearcy of Ridgeland, MS, Gary Pearcy of Bryant Arkansas, daughter; Donna Pearcy of Tchula Vista, California, two grandchildren Sarah and Mary Beth Pearcy of Ridgeland, MS. Cleveland Funeral home is in charge of arrangements.

To order memorial trees or send flowers to the family in memory of Everett Pearcy, please visit our flower store.