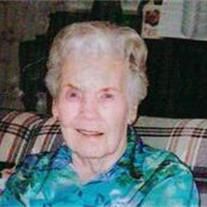 Frances Hathcock Fuquay Caviness, age 94, of Cleveland, passed away on Monday September 30, 2013 at the Bolivar Medical Center Long Term Care.
Visitation will be held Thursday 10/03/2013 from 9:00 AM to 10:00 AM at the Cleveland Funeral Home in Cleveland. Graveside funeral services will be held 11:00 AM Thursday 10-3-2013 at Greenlawn Memorial Gardens in Greenville, MS. Reverend Bob Hill will officiate the service.
Frances was born on July 04, 1919 to Charlie L. and Mae Bell (Bailey) Hathcock in Lexington, MS. Ms. Caviness grew up in Lexington, MS and attended Lexington Schools. She was a former resident of Greenville where she worked as a grocery store clerk and a clerk for Village Pharmacy. She also lived in Lake Village AR where she was a teacher's aid for many years. While in Greenville she was a member of First Christian Church and in Lake Village she attended the Church of Christ. She later moved to Cleveland to be near her family, she joined the Morrison Chapel Baptist Church. Mrs. Frances was a hard working mother and grandmother whose passion in life was raising her children and grandchildren.
She was preceded in death by her parents, husbands; William Cecil Fuquay and Nile H. Caviness, son Vernon Lewis Fuquay, two brothers John Hathcock and twin brother Frank Hathcock and a sister Annie Alvis Wynn.
Ms. Caviness is survived by Son, Walter L. Fuquay of Hot Springs, AR. Son, Steve Fuquay of Cleveland, MS. 4 Grandchildren, 11 Great Grandchildren and 2 great great grandchildren.
Pallbearers are Scott Fuquay, James Sullivan, Parker Noblin, Caleb Smith. Honorary pallbearers are Lee Pierson and David Fuquay. Memorials may be made to Morrison Chapel Baptist Church 196 Morrison Chapel Rd. Cleveland, MS 38732. Cleveland Funeral Home is in charge of arrangements. On-line guest register may be viewed and signed at www.clevelandfuneralhome.net

To order memorial trees or send flowers to the family in memory of Frances Fuquay Caviness, please visit our flower store.