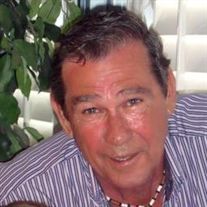 CLEVELAND - George "Bubba" Sherwood, age 73, of Cleveland, passed away on Saturday June 27, 2015 at the St. Dominic Hospital in Jackson, MS.

George was born on July 23, 1941 to Lawson and Elizabeth (Stacy) Sherwood in Ruleville, MS. He grew up in Shaw, MS and graduated Shaw High School. He also attended Delta State University. George went to work with his father in the paint contracting business for many years until he took over Sherwood Painting in 1980. He married Paula Kovarcik on May 28, 2011. He was an avid Ole Miss fan. George loved to golf and dance and enjoyed watching sports.
He was preceded in death by his parents Lawson and Inez Sherwood, two brothers Lawson Sherwood, Jr and Joe Sherwood.

Memorials may be made to the American Cancer Society P.O. Box 22718 Oklahoma City, OK 73123-1718.
Cleveland Funeral Home is in charge of arrangements. The on-line guest register may be viewed and signed at www.clevelandfuneralhome.net.


To order memorial trees or send flowers to the family in memory of George "Bubba" Sherwood, please visit our flower store.