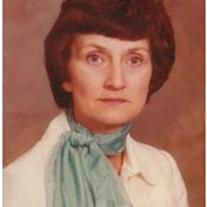 Helen Pearce Bidwell, age 85, of Boyle formerly of Greenwood, passed away on Thursday August 30, 2012 at her home. Visitation will be held Monday September 3, 2012 from 5:30PM until 6:00PM at First Baptist Church Boyle. Funeral Services will follow at 6:00PM at First Baptist Church Boyle in Boyle, MS.  Burial will be 10:00AM Tuesday September 4, 2012 at the Odd Fellows Cemetery in Greenwood. Rev. Clarence Edwards will officiate the services.   Helen was born on September 16, 1926 to Bill and Lela (Yates) Pearce in Greenwood, MS.  She was Greenwood High School graduate and had lived in Greenwood most of her life until moving to be with her daughter 12 years ago. She and her husband owned Delta Sporting Goods in Greenwood for many years. She was very active in her children's life as they were growing up, she was a leader in Girl and Boy Scout troops and attended their sporting events. She was a former member of First Baptist Church in Greenwood where she was active in the children's ministry. She was currently a member of First Baptist Church Boyle. Ms. Bidwell loved her garden, always willing and wanting to show it to all who came by to visit and in her later years, one of her main concerns was who would show her flower garden. Ms. Bidwell was preceded in death by her parents, husband Kenneth Buford Bidwell and two sons; Kenneth Buford Bidwell, Jr. and George Steven Bidwell.   She is survived by Daughter, Marilyn Givens of Boyle, MS.  Grandsons, Jonathan Bidwell Givens of Boyle, MS, Robert Reed Givens, Jr. of Tampa, FL.  Granddaughters, Katie Blake Trantham of Anniston, AL, Anna Lynn Thompson of New Orleans, LA, and Amanda Thompson of New Orleans, LA.  Great Grandchildren, Jonathan Kade Givens of Eminence, MO, Gabriel Bidwell Givens of Tampa, FL, Peyton Anna Rose Givens of Boyle, MS, Lance Killingsworth of Boyle, MS, Caleb Coleman of Boyle, MS, and David Bastari. Pallbearers will be Grandsons; John Givens and Rob Givens, Russell Peeples, Murray Roark, Bo Gill, Randy McGill, Eddie McGill and Reed Givens. Honorary Pallbearer is Jamie Axthelm. In lieu of flowers memorials may be made to First Baptist Church Boyle. Cleveland Funeral Home is in charge of arrangements.

To order memorial trees or send flowers to the family in memory of Helen Bidwell, please visit our flower store.