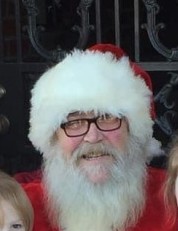 Cleveland--Henry Lee Carpenter, Jr., of Cleveland, MS, passed away on Sunday, April 25, 2021, at his home.
Visitation will be held Saturday, May 1, 2021, from Noon until 1:30 at Cleveland Funeral Home in Cleveland, MS. A graveside service will follow at 2:00 PM at the Linn Methodist Church Cemetery. Rev. Sam Cobb will officiate the service.

Henry was born January 6, 1963, in Shaw, MS to Henry Lee Carpenter and Alene Coats Carpenter. Henry was affectionately known as "Jr.". He grew up in Cleveland and graduated from Cleveland High School in 1982, after which he went into the National Guard.  On November 28, 1987, in Boyle, MS., Henry married the love of his life, Cheryll Ann Hummel. He later worked for Baxter Laboratories and Pafford EMS. He also worked as a nurse's aide, Cleveland Glass and a local cement company.  One of his greatest joys was being one of Santa's Helpers.  He also enjoyed bowling, flying model airplanes, go-kart racing, watching Nascar, dirt track racing, sports, supporting Cleveland High Wildcats, going to theme parks such as Libertyland, Opryland and Six Flags. He also enjoyed taking cruises, playing computer games and video games, and spending time with friends and family.  His larger-than-life personality will be remembered fondly by those whom he left behind.

Cleveland Funeral Home is in charge of arrangements. The online guest register is available to be signed at www.clevelandfuneralhome.net.

To order memorial trees or send flowers to the family in memory of Henry Lee Carpenter, Jr., please visit our flower store.