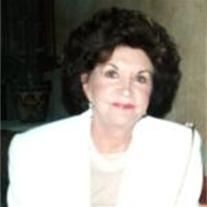 Ida Sue Robinson of Memphis, Tennessee, passed away on December 5, 2010, at peace with this life and this world, to which she had brought such love and vitality.
Ida Sue was born on February 19, 1928, in Ruleville, Ms to Mr. and Mrs. A. L. Barner Sr. who preceded her in death. She spent her childhood years in Ruleville, Miss., and attended Ole Miss University, where she was named the most beautiful girl on campus as a freshman by her classmates. Ida Sue married the love of her life, John Thomas (Son) Beck in 1949 and spent the next eight years as a loving wife and mother to her first four children, Jane, Tom, Reta and Bradford.
When Son Beck passed away unexpectedly in 1957, Ida Sue moved to Memphis and married W.W. (Bill) Robinson Jr. and had two children, Suellen and Bob. She spent many joyful years in Memphis, raising her six children, actively participating in the fabulous social life that defined the city at the time, and sharing her wonderful sense of style, humor, adventure and grace with all of those who had the opportunity to know her. She was a member of the Memphis Country Club and a dear friend to many. When Ida Sue left this world, she left behind a legacy of life that can never be duplicated. All of those who had the great fortune to share in that life were truly blessed.

Ida Sue is survived by her daughters, Jane (Mason) Ezzell of Memphis, Tenn., Reta (Steve) Bledsoe of Memphis, Tenn., and Suellen (Ken) Murchison of Dallas, Texas, and sons Tom (Betty) Beck of Tallahassee, Fla., and Bradford (Sallie) Beck of Dallas, Texas, as well as ten grandchildren and eight great-grandchildren. She was preceded in death by her son Robert Robinson.
A family burial service will be held at the Lehrton Cemetery in Ruleville, where she will be laid to rest beside her beloved Son Beck. In lieu of flowers, memorial contributions in Ida Sue's memory may be made to American Cancer Society or donor's choice. Our family would like to thank the wonderful caregivers, especially Mary Lewis and Crossroads Hospice, for their loving care of our mother.
Cleveland Funeral Home is in charge of arrangements.

To order memorial trees or send flowers to the family in memory of Ida Robinson, please visit our flower store.