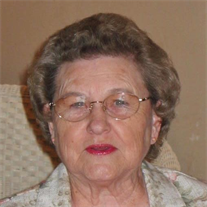 Jackie was born on December 29, 1928 to M. J. "Jack" and Leona (Campbell) Bramlett in Drew, MS. She was a graduate of Drew High School and attended Mississippi State College for Women and Delta State University. She married Floyd Fuqua on August 25, 1947 and moved to Rosedale, MS where they raised their children and were active members of First Baptist Church. Jackie retired after 30 years of service to Mississippi Power & Light Company. She then worked for B & W Monument. Jackie, for many years enjoyed volunteering for community organizations such as the Auxiliary at Bolivar Medical Center, where she had served as treasurer of the gift shop. She also volunteered as an ambassador for the Bologna Preforming Arts Center. Jackie enjoyed working in her yard, reading and working jigsaw puzzles with Darlene. She was a member of First Baptist Church in Cleveland, MS and a Matron for the Order of the Eastern Star. The family wishes to express special thanks to neighbors, Kenny and Becky Carpenter, and companion, Darlene Castle Estes, for the devoted care and attention given to their mom's needs.
She was preceded in death by her parents, husband of 66 years Floyd Edgar Fuqua, Jr., sister, Lorene Laws Gregory, daughter, Jacqueline Dawn Fuqua and a grandson, James Wesley "Wes" Fuqua.

To order memorial trees or send flowers to the family in memory of Jacqueline Bramlett Fuqua, please visit our flower store.