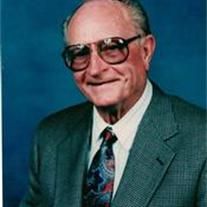 James Edward "Red" Hood age 85, of Cleveland, died on Sunday December 04, 2011 at the Bolivar Medical Center.   Visitation will be held Thursday December 8, 2011 from 12:00p.m. until 1:45p.m. at Cleveland Funeral Home. Graveside funeral service will follow at 2:00PM in North Cleveland Cemetery. Reverend Harold Mosley will officiate the service.  He was born on October 20, 1926 to Robert and Mary (Bowen) Hood in Cleveland. He lived most of his life on Zumbro Plantation and attended Cleveland Schools until he enlisted in the Navy during WW II. After returning to Cleveland from the Navy, he enlisted in the National Guard and served in the Korean War, where he received the Bronze Star and Purple Heart Medals.  After the war Mr. Hood became a ginner in Cleveland and Drew areas until his retirement. He was a member of Providence Baptist Church.   Mr. Hood was preceded in death by his parents, a sister Louise Browning, brother, Bobby Hood and former wives Doris Sims Hood and Evelyn Turner Hood.  He is survived by Spouse, Lula Baker Hood of Cleveland, MS. Three sons, James E "Jimmy"(Sylvia) Hood of Boyle, MS, Robert Earl (Carolyn) Hood of Cleveland, MS, Johnny Lamar (Joan) Hood of Flowood, MS  and a host of grandchildren and great grandchildren.   Pall-bearers will be Jonathan Hood, James Edward "Jimbo" Hood III, Scott Hood, Jay Hardy, Tim Tharp and Jimmy Nobile. Memorials may be made to the American Cancer Society P.O. Box 22718 Oklahoma City, OK 73123-1718 Cleveland Funeral Home is in charge of arrangements.

To order memorial trees or send flowers to the family in memory of James Hood, please visit our flower store.