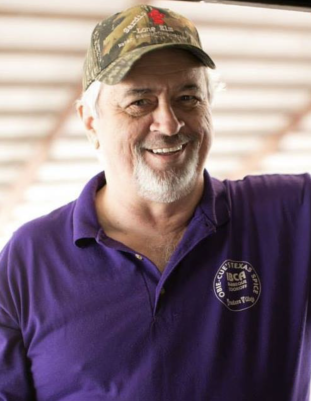 Jimmy was born on March 21, 1957 in Tillamook, Oregon to David and Jean (Robertson) Jenkins. Growing up in Greenville, Mississippi, Jimmy’s youth was spent playing baseball and roaming “Mayberry Road” as he liked to call it. As were his brothers, Jimmy was a member of the local Woodmen Ranger troop and enjoyed learning about the outdoors, spending time on campouts, honing his skills that made him a sure shot with a rifle, and open-fire cooking. It was during these formative years in the Mississippi Delta that Jimmy developed his passion for the outdoors.

Upon graduating from Greenville High School in 1975, Jimmy attended Mississippi Delta Community College before transferring to the University of Southern Mississippi where he earned his B.S. in Construction Technology. Jimmy’s career in commercial and large-scale construction and energy management took him all over the country and by the end of his career, Jimmy had amassed a long list of industry associates that had become dear personal friends.

In 1982, Jimmy became the father of triplet sons James, Joseph, and Clifford followed by his fourth son Michael in 1986. As an active and engaged father, he became involved in Boy Scouts of America in 1994 with Troop 228 of Independence, Missouri and then served whole-heartedly as a leader when he moved to Texas and became involved with Troop 524. He thoroughly enjoyed his time on the Circle 10 Council where he trained young men and young fathers, positioning them to be the Scout leaders of tomorrow. Jimmy strongly believed in the family unit and constantly said that it was the most important thing in America.

Jimmy truly loved family and family get-togethers, even coining the term eatin’ meetin’ with his cousin Kenny. He loved pitching in to cook, never caring to be in the spotlight, because he was happy to work humbly behind the scenes helping anyone in any way that he could; a trait learned from his parents.

Jimmy lived his life in accordance with 1 Corinthians 13:4-7 because he loved people for who they were, no strings, conditions, or expectations attached. He consistently put his needs aside to serve others, frequently dropping everything at a moment’s notice to help someone else. Jimmy had a quiet self-confidence about him, knowing exactly who he was and living the life of service to others. These qualities ensured that he led with integrity.

Jimmy also is survived by his siblings and their families - Bruce Jenkins,  Dean and Angel Jenkins, and Leslie and Kenny Williams. Jimmy is also survived by many cousins, nieces and nephews that he loved so very dearly.

A visitation will be held from 7:00 P.M. to 9:00 P.M. on Wednesday, June 26th at Jaynes Memorial Chapel at 811 South Cockrell Hill Road in Duncanville, TX. The Celebration of Life service will be on  Thursday, June 27th at 10:00 A.M., also at Jaynes Memorial Chapel. Jimmy’s final resting place will be Jenkins Cemetery in Attala County, Mississippi with a graveside service on Saturday, June 29th at 10:30 A.M. In case of inclement weather, the committal service will be held at Crestview Congregational Methodist Church in Kosciusko, MS instead of the Jenkins Cemetery.

In remembrance of Jimmy and the life he lived, donations may be made to Ovilla Road Church of the Nazarene at ORCN.org and/or your local Future Farmers of America chapter.

To order memorial trees or send flowers to the family in memory of James "Jimmy" David Jenkins, Jr., please visit our flower store.