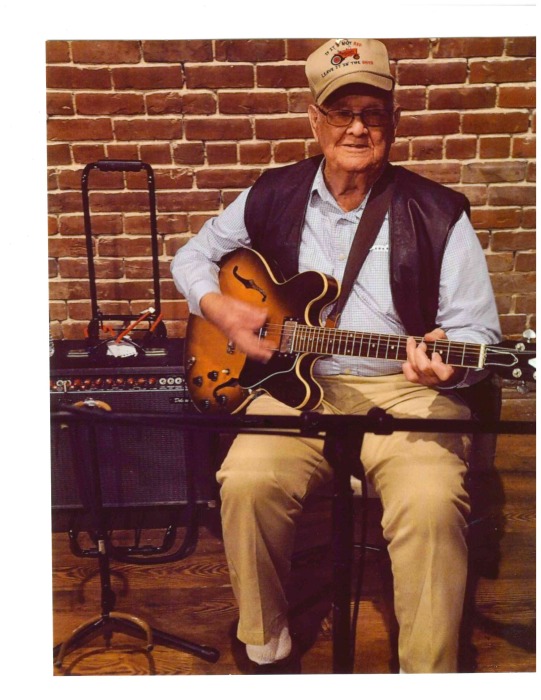 James was born April 21, 1928, in Cleveland MS, to Joseph Dewey and Viola Beulah Phelps Joel. He graduated from Cleveland High School and went to work with Lowery Tim for many years as a truck driver. He married Margaret J. Robertson on June 12, 1948, in Clarksdale, MS. He then worked with Planter's Equipment as the parts manager for 32 years. after retirement, James "Juicy" as he was affectionately known,  moved to Mountain View Arkansas where he played his guitar on the square at the Folk Center. He had a [passon for playing music and even recorded at the Sun Studio in Memphis, TN. He played with the Lonesome Cowboys for several years and they were featured in an article in the New York Times. In his later years, James enjoyed playing with the Tuesday Night Pickers. He also loves spending time with his coffee-drinking buddies at McDonald's. Besides playing his guitar James loved to Joke with his friends and family. His family says he was the best dad and father anyone could have. He loved his family dearly. He was a member of the Cleveland Church of Christ.

He is survived by his son, Lewis Michel Joel of Inverness, MS, daughter, Margaret Ann Moore of Cleveland, Ms, 10 grandchildren, and 14 great-grandchildren. He also leaves a host of nieces and nephews to cherish his memory.

A graveside service will be held at 2:00 pm on Thursday, March 11, 2021, at Delta Height Memorial Cemetery.

Cleveland Funeral Home is in charge of arrangements. An online register book can be signed at www.clevelandfuneralhome.net.

To order memorial trees or send flowers to the family in memory of James Hardman Joel, please visit our flower store.