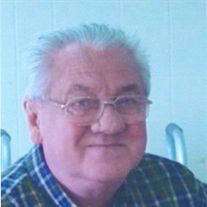 COFFEEVILLE - James Franklin Morgan, age 67, of Coffeeville, passed away on Thursday June 18, 2015 at his home in Coffeeville.
Visitation will be held Monday June 22, 2015 from 9:00 AM to 10:00 AM at the Cleveland Funeral Home in Cleveland. Funeral Services will follow at 10:00 AM in the Cleveland Funeral Home. Burial will be at the Shelby Cemetery. Reverend Fred Moorman will officiate the services.

Mr. Morgan was born on April 16, 1948 to Charley and Opal (Lones) Morgan in Cleveland, Tennessee, he and his family moved to Florida and North Carolina and then back to Cleveland Tennessee before moving and retiring in Coffeeville, Mississippi. He married Margarette Yawn on May 31, 1986 in Cleveland, TN. He was a self employed brick mason. James enjoyed playing his guitar, singing, working in his yard and gardening. He was a member of Gateway Church of God in Coffeeville.
He was preceded in death by his parents Charley and Opal Morgan and a sister Clara Annie Morgan Griffin.

To order memorial trees or send flowers to the family in memory of James Franklin Morgan, please visit our flower store.