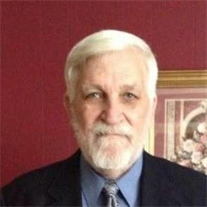 CLEVELAND- James Melvin Steadman, Sr. age 73 of Cleveland went to be with
his Lord Wednesday December 9, 2015 at his home in Cleveland.

Melvin was born January 30, 1942 on the Zumbro Plantation to Thomas Elmer and
Lorene Mosley Steadman. He graduated from Cleveland High School in 1960.
Melvin worked for Denton's Milk Company, Baxter Laboratories and
the University of Florida police department before attending the Mississippi
State Highway Patrol School in 1972. He was a Master Sergeant for the
Mississippi Highway Patrol at his retirement in 2002. After retirement , he
became a Court Security Officer for the US Marshall's Office in Greenville,
MS and was employed there until April of 2015. Melvin was a lifelong member
of Mid-South Baptist Church where he served as Deacon and Treasurer. He was a
former escort for the Delta State University football team for 20 years.
He was very appreciative of the Championship ring he received.
Melvin loved singing with the Living Sonlight and the Steadman Brothers quartets since 1995.
Melvin enjoyed fishing, trot lining and supporting his favorite sports teams; Delta State
University and Ole Miss.

Cleveland Funeral Home is in charge of arrangements. Theon-line guest
register may be viewed and signed at www.clevelandfuneralhome.net


To order memorial trees or send flowers to the family in memory of James Melvin Steadman, please visit our flower store.