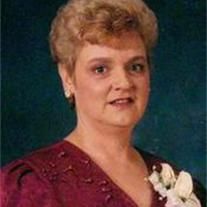 INDIANOLA - Jean Weeks Brookins, age 58, of Indianola formerly of the Interstate Community, passed away on Tuesday May 07, 2013 at the home of her daughter.   Visitation will be held Thursday May 9, 2013 from 12:00 PM to 2:00 PM at the Cleveland Funeral Home in Cleveland.  Funeral Services will follow at 2:00 PM in the Cleveland Funeral Home Chapel.  Burial will be in the Delta Heights Memorial Gardens in Cleveland. The Reverend Gerald Greenlee will officiate the service.  She was born as the only child of James and Evelyn (McKnight) Weeks February 26, 1955 in Cleveland. Jean attended Bayou Academy and Mississippi Delta Community College.  She married Mike Brookins in 1979. She was a former manager of the Cleveland Cato Store for many years and had previously worked at the Indianola Insurance Company.  Jean attended Interstate Baptist Church. She was a family oriented person who always enjoyed spending time with her children and grandchildren. She was preceded in death by her parents.     She is survived by her husband of 33 years, Mike Brookins of Indianola; daughter, Janet Crawford (James) Ray of Indianola; 2 sons, David (Bridget) Walden of Advance, NC, and Daniel (Susan) Walden of Brussels Belgium, 9 grandchildren; Elizabeth Kliensmith, Brooke Ray, Rivers Ray, Cody Walden, Savannah Walden, Brittany Walden, Regan Walden, Megan Walden and Haley Walden. Pallbearers will be Gerald McClure, Joe McKnight, Stacy Beckwith, Andy Perry, Darnell Gay and Marty Hall. Honorary pallbearers are the North Sunflower Academy Football Team. Memorials may be made to the American Cancer Society or North Sunflower Academy Booster Club 146 Academy Rd. Drew, MS 38737. Cleveland Funeral Home is in charge of arrangements.

To order memorial trees or send flowers to the family in memory of Jean Brookins, please visit our flower store.