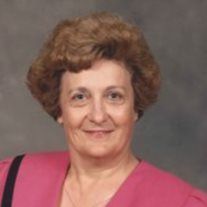 Martha Jean Lyons, age 77, of Shaw, died on Saturday February 15, 2014 at her home.
Visitation will be held Monday February 17, 2014 from 6:00 PM to 8:00 PM at the Cleveland Funeral Home in Cleveland. Funeral Services will be held 2:00 PM Tuesday 02/18/2014at Cleveland Church of God in Cleveland. Burial will follow in the Shaw Cemetery. Reverends Greg Chamblee and Bob Lyons will officiate the services.
Jean was born on October 28, 1936 to Homer and Gladys (McDaniel) Holly in Vaiden, MS. She attended schools in Vaiden, MS, graduated Mississippi Delta Junior College with and LPN degree while working at Bellsouth Telephone Company in Greenville. Jean married Norman "Moot" Lyons on June 22, 1956 in Moorhead, MS over the 57 years of marriage they lived in several locations, Shaw, Monroe, Louisiana, Drew; where she worked at Drew Grocery and the family farm in Shaw. She was also a former nurse's aid. Jean was the executive Director of Helping Hands in Cleveland for 20 years until her retirement in 2011. She was a faithful member of the Cleveland Church of God, having served on many committees, taught Sunday School, sang in the choir and Senior Adult Leader for many years.
She was preceded in death by her parents, sister Opal Petty and a brother Billy Holly.
Jean is survived by her spouse, of 57 years Norman "Moot" Lyons of Shaw, MS. Two daughters; Debra (John) Fortenberry of Atoka, TN. and Teresa (Keith) Spealman of Indianola, MS. Four brothers; Bobby Holly of Clarksville, AR, Jimmy Holly of Vaiden, MS, Tommy Holly of Vaiden, MS and Johnny Holly of Vaiden, MS. Grandchildren, Jonathan (Lauren) Fortenberry of Munford, TN, Kimberly Fortenberry of Memphis, TN, Brandon Spealman of Indianola, MS, Bradley Spealman of Indianola, MS. Great Grandchild, Drew Fortenberry of Munford, TN. She also leaves behind a host of nieces, nephews and friends.
Pallbearers are Greg Petty, Buster Lacey, Mike Lacey, Jimmy Free, Robert McDaniel, Stanley McGaugh and Joey McGaugh.
Memorials may be made to Helping Hands or the Cleveland Church of God (WEA Missions Project.)
Cleveland Funeral Home is in Charge of arrangements. On-line guest register may be signed at www.clevelandfuneralhome.net


To order memorial trees or send flowers to the family in memory of Jean Lyons, please visit our flower store.