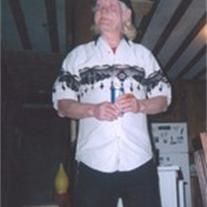 Jerry Ray Brown, age 57, of Ferriday, LA died on Monday June 15, 2009 at his residence. He was born on November 24, 1951 to David and Marie (Gilbert) Brown in Duncan, MS. Mr. Brown worked all his life as a carpenter. He was a lover of life unselfish in his giving to others. He also loved a clean cut yard and cold drink on the side. His family says he could always make you smile and if you needed him he was there. He will be missed by many and was loved by all who knew him. He had friends wherever he went. God blessed him and he blessed others. Visitation will be held from 6/18/2009 1:00 PM to 3:00 PM at the Cleveland Funeral Home in Cleveland. Funeral Services will be held 6/18/2009 3:00 PM at Cleveland Funeral Home Chapel. Burial will be at the Shelby Cemetery in Shelby, MS. The Rev. Percy Beach will officiate the services. He is survived by Daughter, Rhonda Emfinger of Vidalia, LA. Son, Jerry Wayne of Vidalia, LA. Daughter, Brittany and husband Brian Floyd of Ferriday, LA. Brother, David Brown, Jr of Ferriday, LA. Brother, Tommy Brown of Alexandria, LA. Sister, Diane Coleman of Cleveland, MS. Sister, Maxine Baillio of Baton Rouge, LA. Brother, Jackie Brown of Cleveland, MS. Sister; Kathrine Simpson of Alexandria, LA. Sister, Linda Gilbert of Cleveland, MS. Brother, Leroy Brown of Cleveland, MS. Grandsons; Austin Emfinger, Zachary Emfinger both of Vidalia LA, Holton Brown of San Antonio, TX, Jerry Wayne Brown, Jr of Ferriday, LA. Grand Daughter, Emily Brown of San Antonio, TX. Special Friend Mary Ann Orcutt of Ferriday, LA and numerous nieces and nephews. Pallbearers will be Jackie Brown, Leroy Brown, Keith Brown, Tony Brown, Bernard Emfinger and Jerry Wayne Brown. Honorary Pallbearer is Austin Emfinger. Cleveland Funeral Home is in charge of arrangements.

To order memorial trees or send flowers to the family in memory of Jerry Brown, please visit our flower store.