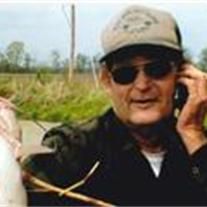 Jerry Wayne Vardaman, Sr. age 68, of Cleveland, passed away on Saturday December 14, 2013 at the Baptist Memorial Hospital in Jackson. Visitation will be held Tuesday 12/17/2013 from 6:00 PM to 8:00 PM at the Cleveland Funeral Home in Cleveland. Funeral services will be held 10:00 AM Wednesday 12/18/2013 at Cleveland Funeral Home Chapel. Rev. Percy Beach will officiate the service.
Jerry was born on June 11, 1945 to Marcus Talmage and Laurel Dathner (McCoy) Vardaman in Empire Alabama. He was a lifelong resident of Bolivar County. He married Shirley Ann McPherson on November 25, 1965. The two settled in Cleveland in 1972 where they raised their 4 children. Mr. Vardaman was retired maintenance technician from Baxter Healthcare where he had worked approximately 25 years. Jerry loved to fish and hunt and did so until his health deteriorated. Jerry also loved to fly, go to the dirt track races and take rides with his canine companion "Sissy". He was a generous man always willing to give to those in need. He was a hard working, loving father and grandfather who will be missed by his family and friends.
Jerry was preceded in death by his parents, four brothers; Milton, Ray, Larry and Dwight Vardaman and a sister Mary Jordan.
He is survived by Daughter, Debbie Lynn Thompson of Boyle, MS . Son; Jerry Wayne Vardaman, II of Brandon, MS. Daughter; Lisa Ann Sanchez of Cleveland, MS. Son; Mark Allen Vardaman of Cleveland, MS and a sister; Margaret Faye Mardis of Lake Village, AR. Eight grandchildren, six great grandchildren, and a host of nieces and nephews.
Honorary Pallbearers are Jeremy Blake Vardaman, Dillon Jose' Montes, Larry Thompson, Taylor "Bubba" Thompson, Larry Tolivar, Mickey Vardaman, James Mardis, Jamie Weeks and Joshua Moseley. Memorials may be made to St. Jude's Research Hospital 501 St. Jude Place Memphis, TN. 38105 or Mississippi Hearts Against AIDS at http://www.mississippihearts.org/ Cleveland Funeral Home is in Charge of arrangements.

To order memorial trees or send flowers to the family in memory of Jerry Vardaman,, please visit our flower store.