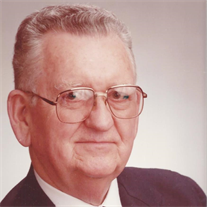 Joe Thomas Kennon, Jr., passed away on May 8, 2016, at Mississippi State Veterans Home in Oxford, Mississippi.
Celebration of Life will be conducted on Tuesday, May 10, 2016, at 1:00 PM in the Chapel of Dilday-Carter Funeral Home. Rev. Kristopher Smith and Rev. John Rush will officiate the service.
The family will receive friends on Tuesday at Dilday-Carter Funeral Home from 11:00 AM until time of service.
Mr. Kennon was born June 19, 1923, in Carroll County, Tennessee to the late J.T. and Ella Mae (Foster) Kennon. He is preceded in death by his wife, Evalena Bolen Kennon, and his sister, Louise Rhodes Kennon.
He is survived by his daughters and their spouses: Linda and John Wright of Thompson's Station, TN, and Kathy and Joe Weaver of Ruleville, MS. He is also survived by four grandchildren: Lindsay Doyal (Ricky) of Knoxville, TN; Jeremy Wright of Brentwood, TN; Hope Smith (Kris) of Petal, Mississippi, and Joey Weaver (Carmen), of Germantown, TN. He is also survived by six great-grandchildren: Anslee and Andrew Doyal, Kennon and Kaden Smith, Luke and Charlotte Weaver.
His greatest gift to his family and friends was his witness of a Christian life. His love of Jesus will be a legacy for all who knew him. He believed in the strength of family and with his wife of fifty-four years, provided a firm foundation based on the Word of God.
He served in the U.S. Army from 1943-46. After returning to Huntingdon after World War II, he graduated from Bethel College in 1954. He taught at Clarksburg High School from 1954-58. In 1958, he started working as a Veterans Representative for the Tennessee Department of Employment Security. He retired in 1989 after thirty-three years of service. He was an avid gardener and active in his community. He was patriotic and held a deep respect for our country's military.
His love of the Lord inspired his faithfulness to his church throughout his life. He was ordained as a deacon at First Baptist Church in Huntingdon in 1943 and served as a deacon until 1994. He was a Sunday School teacher and served in various leadership roles including Chairman of Deacons. Mr. Kennon never met a stranger and also considered a conversation as an opportunity to give witness to his faith in Jesus.
Due to declining health, he moved to Ruleville, MS in 2006 to live with his daughter and son-in-law, Kathy and Joe Weaver, and he joined Dockery Baptist Church in Cleveland, MS.


To order memorial trees or send flowers to the family in memory of Joe Thomas Kennon, , Jr, please visit our flower store.