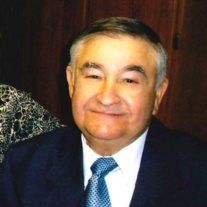 John Edward Mims, age 84, of Cleveland, passed away on Sunday March 09, 2014 at the Baptist Memorial Hospital-Desoto in Southaven.
Visitation will be held on Tuesday 03/11/2014 from 05:00 PM to 07:00 PM AM at the Cleveland Funeral Home in Cleveland. Funeral Services will be held 10:00 AM Wednesday 03/12/2014 at the Cleveland Church of Christ 212 Ronaldman Rd Cleveland, MS. Burial will be in the Caile Cemetery, Inverness, MS. Brother Tim McCarter will officiate the service.
John was born on December 24, 1929 to Jacob Curtis and Stella (Johnson) Mims in Drew. He graduated Drew High School. He was a retired Major for the Army National Guard who also served in the Korean War in Germany. John married Aylene Smith on October 10, 1950 in Cleveland, MS. They lived in Cleveland from 1966 until 1993 when they moved to Gore Springs. They returned to Cleveland in 2009. John was employed by several companies over his life including; Mim's Cleaners, Sanders Inc., National Compress in Drew and retired rice broker from American Rice of Dallas ,TX. He was a member of the Cleveland Church of Christ where he was the former music leader. John loved playing bocce ball and drinking coffee with the McDonald's Coffee Club. John enjoyed organizing 2 reunions each year; the National Guard and his High School Class reunions. He was also known for his knowledge of Drew history, always giving out details and information to whomever may call and express interest.
The Mims family wishes to express their thanks to all that visited and prayed for John.
John was preceded in death by his parents, brother, James Mims and 2 Sisters, Sarah Gordy and Kathryn Williams.
He is survived by his wife of 63 years, Alyene Smith Mims of Cleveland, MS. Daughter, Jody (Sammy) Couch-Maxwell of Fullerton, CA. Special niece, Kay Reed of Cleveland, MS. 2 nephews and 7 nieces.
Pallbearers are Charles Smith, Jr, Watson Cook, Ben Wooten, Bryant Reed, Johnny Baughman and Barry Mims. Honorary pallbearers are Sammy Maxwell, Jim Reed, Charles Smith, Sr., Sonny Gordy, Butch Mixon, J D Mathis and the McDonald's Coffee Club Men.
Memorials may be made to the Cleveland Church of Christ 212 Ronaldman Road Cleveland, MS 38732.


To order memorial trees or send flowers to the family in memory of John Edward Mims, please visit our flower store.