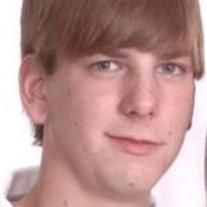 John Eric Roberson, age 22, of Boyle, died on Sunday July 04, 2010 in Madison County.  He was born on December 22, 1987 to Bobby Roberson, Sr. and Karen Britton Keys in Greenville, MS.  He married Crystal Beevers Roberson on July 17, 2009 in Lake Village, AR. Eric attended school at Riverside High. He was employed for the past 3 years as an electrician for Robinson Electric in Cleveland. He was a member of First Baptist Church Boyle, MS. Eric was an avid outdoorsman. His passion was hunting, fishing, riding four-wheelers and mud riding. Anything outside was where he liked to be. His wife Crystal says he was a loving husband and a friend to all who knew him. He will be missed by all especially his nephews to whom he devoted much of his time. Visitation will be Wednesday July 7, 2010 from 6:00PM ~ 8:00PM at the Cleveland Funeral Home in Cleveland.  Funeral Services will be held Thursday July 08, 2010 10:00 AM at Cleveland Funeral Home Chapel. Interment will follow in the North Cleveland Cemetery.  His step father Rev. Perry Keyes will officiate the service assisted by Rev. James Wilkerson. He is survived by wife, Crystal Beevers Roberson of Boyle, MS. father, Bobby Roberson, Sr. of Greenville, MS.  Mother, Karen Britton Keyes and Step-Father, Perry Keyes of Picayune, MS.  Brother, Glenn and wife (Crystal) Roberson of Hollandale, MS.  Brother, Dustin Keyes of Boyle, MS.  Sister, Kimberly and husband (Louis) Hano of Abita Springs, LA. Grandmother, Jean Britton of Hollandale, MS.  Grandmother, Betty Keyes of Cleveland, MS.  Two nephews, Hunter Roberson of Hollandale, MS and Carter Hano of Abita Springs, LA. Cleveland Funeral Home is in charge of arrangements.

To order memorial trees or send flowers to the family in memory of John Roberson, please visit our flower store.