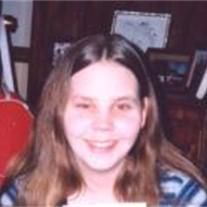 MEMPHIS - Ladonna Brown McCammon, age 30, died on Thursday July 01, 2010 at her home.  She was born on September 02, 1979 to Marvin and Linda(Therrell) Brown in Odessa, TX. Ladonna was raised in Memphis, TN where she attended Balmoral Elementary School, Kirby High School and was a graduate of Gateway Christian Academy. She was a doctor's assistant for 12 years at Brookhaven Medical Clinic in Memphis. Ladonna was a member of Park Village Christian Church. She was a loving mother and daughter. She was an animal lover and has nurtured many animals through the years. Her children were her pride and joy. Ladonna enjoyed the outdoors. Her family says she was an amazing woman.  Visitation will be held on Monday  7/05/2010 from 1:00 PM until service time at 2:00 PM in the Cleveland Funeral Home Chapel in Cleveland, MS. Burial will follow at the Delta Heights Memorial Gardens. Rev. Clarence Edwards will officiate. She is survived by Parents, Marvin Brown and  Linda Therrell Brown of Cleveland, MS.   2 Daughters, Amanda and Katelyn McCammon of Memphis, TN.  Sister, Malinda Miller of Memphis, TN. Brother, Jeff Brown of Louisville, TX and a host of aunts, uncles, nieces & nephews.   Pallbearers will be James Therrell, Eddie Therrell, Steve McDonald, Chuck Miller, Russell Steadman and Richard Rector.Cleveland Funeral Home is in charge of arrangements.

To order memorial trees or send flowers to the family in memory of Ladonna McCammon, please visit our flower store.