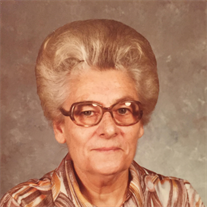 Ms. Wilson was born on August 17, 1922 to James and Bonnie Lee (Alford) Stewart in Linn, MS. She grew up in the Cleveland/ Merigold and lived in the area all her life. She was a hard worker having raised 6 children. She also had worked as a nurses' aid for Bolivar Hospital. Ms. Wilson was a loving mother and grandmother. She was a member of the Church of Faith in Cleveland. She was also a former member of the Sunflower Church of the Nazarene for many years.
Ms. Wilson was preceded in death by her parents James and Bonnie Lee Stewart, husbands; Eddie Lee Wilkerson and A D Wilson. 5 brothers; James Stewart, William Stewart, George Stewart, Charlie Stewart and Ernest Stewart. Sister, Hattie Bell Frazier, 3 sons, James Wilkerson, Sr., Sam Wilkerson, and Edward Wilkerson, a daughter Bonnie Wilkerson and a granddaughter Wendell Stringer.

To order memorial trees or send flowers to the family in memory of Lula Mae Wilkerson Wilson, please visit our flower store.