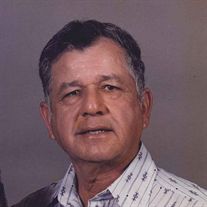 Manuel was born on August 12, 1931 in Brownsville, TX to Pedro and Maria Flores. He moved to the Delta in 1936 and farmed in the area for many years. He was a former sanitation employee for the City of Cleveland. He moved to Falkville, Alabama for over 20 years and also lived in Hartsella and Decatur Alabama. Mr. Flores was an avid gardener and loved watching various types of western movies. He was a member of Tunstele Road Baptist Church in Hartsella, AL.
He was preceded in death by his parents, wife Della Goss Flores and a son Tommy Goss.


To order memorial trees or send flowers to the family in memory of Manuel A Flores, please visit our flower store.