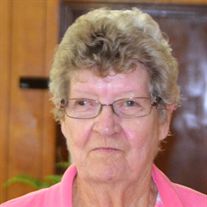 Marjorie was born on October 29, 1940 to Ernest Eugene and Lena Adcox McWilliams in Sunflower County, MS.
Marjorie graduated from Mize High School in 1958. She married Bernie E. Collier on May 1, 1964 in Linn, MS. She worked as a bookkeeper and sales clerk at Jay's Department Store for 22 years. She also worked with her husband in Collier Accounting Service for more than 20 years. Mrs. Collier was a member of Boyle Baptist Church. She enjoyed spoiling her grandchildren. She loved spending time with and talking on the cell phone with her children, grandchildren and friends. Cooking was also her passion.

Cleveland Funeral Home of Cleveland, MS is in charge of arrangements. The online guest register may be viewed and signed at www.clevelandfuneralhome.net

To order memorial trees or send flowers to the family in memory of Marjorie McWilliams Collier, please visit our flower store.