CLEVELAND - Martha Ann Milan Hamilton , age 69, of Cleveland , MS , passed away on Saturday June 07, 2014 at her home.
Visitation will be held Tuesday, June 10th from 12:00 Noon to 1:45 PM at West Drew Baptist Church with funeral services to follow at 2:00 PM at West Drew Baptist Church. Private graveside service will follow in the Delta Heights Memorial Gardens. Rev. Ricky Milan will officiate the service.
Martha was born on December 25, 1944 to Robert and Vestal (Hearld) Milan in the Long Shot Community. She married Raymond Lee Hamilton on January 02, 1963 in Lake Village , AR. Martha was a homemaker and a waitress who had worked for Simmons Drug Store, Michael's Cafe, Big Star, and Development Learning Center in Texas and was a baby sitter most of her later years. She was a member of the Church of Jesus in Skene, MS. Martha loved to work in her flower garden and loved the outdoors. She loved to sing and hear her kids sing. She was on the radio in the 1950's with Bro. Ed Hall.
Martha was preceded in death by her parents, 1 son, Darrell DeWayne Hamilton; her Great Granddaughter Alexis Brook Lynn Hamilton; her Great Grandson Matthew DeWayne Hamilton, Jr and her sister Clara Ruth Perry.
Martha is survived by husband of 51 years, Raymond Lee Hamilton of Cleveland, MS; Daughter, LaWanna Gail (James) Bowen of Boyle, MS; Son, George Gregory Hamilton of Cleveland, MS; Son, Frankie Ray (April) Hamilton of Cleveland, MS; Son, Stacey Lynn (Kristina) Hamilton of Farmersville, TX; Sister, Syble Milan Greer of Cleveland, MS; Brother, Bobby Harold Milan of Cleveland, MS; Brother, Doyle Milan of Cleveland, MS; Brother, Ricky Milan of Cleveland, MS. She also leaves 16 Grandchildren, 10 great grandchildren, and a host of nieces and nephews.

Memorials may be made to St. Jude's Research Hospital 501 St. Jude Place Memphis , TN 38501
Cleveland Funeral Home is in charge of arrangements.
Online guest register may be viewed and signed at

To plant memorial trees or send flowers to the family in memory of Martha Hamilton, please visit our flower store.

I am so very sorry for your loss. The Bible makes this comforting promise: "Jehovah is close to the brokenhearted, He saves those who are crushed in spirit." (Psalm 34:18) It also assures us: "Throw your burden on Jehovah, and he will sustain you. Never will he allow the righteous one to fall." (Psalm 55:22) May these thoughts bring you a measure of comfort at this difficult time.

She was a beautiful and sweet woman and will be missed.

Brent, Stacy, & family, I remember Mrs. Hamilton as such a sweet, loving lady. Be sure you have a heart picture of her entrance into heaven, being welcomed by Dewayne, her parents, others who were waiting for her, and most of all, by Jesus. Make it the most beautiful picture you can imagine and them remember our best is but a glimpse of God's reality. Love and prayers for all of you today as you say, "'Til we meet again."

Loving Lilies and Roses Bouquet was purchased for the family of Martha Hamilton.

She was a sweet lady and will missed by everyone that knew herGod bless the family we are praying for ya'll.

She will be missed. Praying for Gods blessings for the family.Dolly Williams 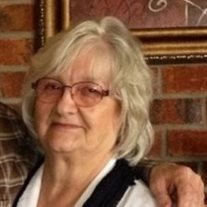