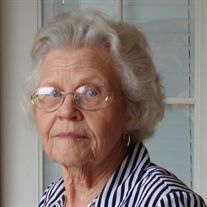 Mary was born on April 29, 1921 to Upton and Fannie (Stephenson) Brown in Eupora, MS. She graduated from Pace High School where she was the class prophet. She met her husband William Vernon Stephenson in Memphis during WW II while attending Draughn's Business College. After the war ended they moved to Shelby, MS. Mary worked for Dr. Hollingsworth and Shelby Clinic for 40 years. She was a member of the First Baptist Church and the Order of the Eastern Star in Shelby. She loved to sing, ballroom dance and was an amazing seamstress.
Mary was preceded in death by her parents Upton and Fannie Brown, her son William Rodney Stephenson, three sisters- JoAnn Beevers, Sue Craig and Willie Carwile, and one brother Thomas Brown.

Cleveland Funeral home is in charge of arrangements. The on-line guest register may be viewed and signed at www.clevelandfuneralhome.net

To order memorial trees or send flowers to the family in memory of Mary E Stephenson, please visit our flower store.