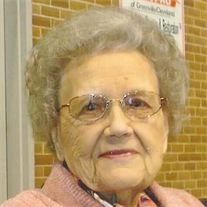 CLEVELAND - Mattie Evelyn Marion Walker, age 85, of Cleveland formerly of Pontotoc, MS, passed away on Sunday January 24, 2016 at her home in Cleveland.

Visitation will be held Wednesday January 27, 2016 from 1:00 PM to 2:00 PM at the Toxish Baptist Church in Pontotoc. Funeral Services will follow at 2:00 PM at Toxish Baptist Church. Burial will be at the Rose Hill Cemetery in Houlka, MS. Reverend Paul Childress will officiate the service.
Evelyn was born on August 29, 1930 to William Baker and Irene (Peden) Marion in Van Vleet, MS. She graduated from Okolona High School and Draughon School of Business in Memphis, TN. She married Herbert Loy Walker on November 17, 1953 in Pontotoc, MS. Mrs. Walker was the office manager for Wood and Carlton Attorney's in Pontotoc for over 20 years. She moved to Cleveland after her husband's death to be near her daughter and family.

Memorials may be made to the Sanctuary Hospice House P.O. Box 2177 Tupelo, MS 38803.
Cleveland Funeral Home is in charge of arrangements. The on-line guest register may be viewed and signed at www.clevelandfuneralhome.net

To order memorial trees or send flowers to the family in memory of Mattie Evelyn Walker, please visit our flower store.