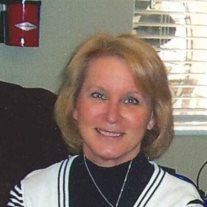 CLEVELAND - Melinda Cobb Hill, age 63, of Cleveland passed away on Saturday February 01, 2014 at the University of Mississippi Medical Center in Jackson.
Visitation will be held Monday February 03, 2014 5:00 PM to 7:00 PM at the Cleveland Funeral Home in Cleveland. Funeral Services will be held 11:00 AM Tuesday, 02/04/2014 at Cleveland Funeral Home in Cleveland. Burial will follow in the Hickory Grove Cemetery in Inverness, MS. Reverends Bob Hill and Clarence Edwards will officiate the services.
Melinda was born on May 16, 1950 to Dr. John and Ruby (McWhite) Cobb in Jackson, MS. She attended Inverness schools and graduated Delta State University with a BS in Education.
She was office manager for Eley Barkley Engineering. Melinda was a former Supervisor for 32 years with the Department of Human Services. She was also a former Wal-Mart Assistant Manager for 15 years.
Melinda was a huge Mississippi State football fan; she loved gardening, playing the piano and singing. She especially enjoyed the Tuesday Night Pickers' Club at Grover's Corner. Melinda was a member and pianist for Boyle First Baptist Church. She was preceded in death by her parents, brothers; Fred Cobb and John Cobb.
Pallbearers will be Christopher Collins, Steve Simpson, Brian Shearer, Floyd Arbuckle, Bubba Bell and Norman Eldridge.
Memorials may be made to the Boyle First Baptist Church Music Department.
Cleveland Funeral Home is in charge of arrangements. On-line guest register may be viewed and signed at www.clevelandfuneralhome.net
She is survived by Son, Joshua Allen (Vaughan) Hill of Ackerman, MS.; Brother, Jimmy Cobb of Greenwood, MS; 2 grandchildren: Christopher and Olivia of Ackerman, MS.


To order memorial trees or send flowers to the family in memory of Melinda Hill, please visit our flower store.