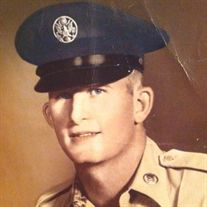 James was born on February 14, 1938 to James Doyle and Artie Mae (Acy) Winters in Black Hawk, MS. He attended Pace Elementary and graduated from Rosedale High School. He obtained Vocational Technical degrees from Mississippi Delta Community College. He married Mary Jane Parttridge on November 22, 1957 at the Sunflower Church of Nazarene. James joined the Air Force serving in the transportation division and obtained the rank of Airman 3rd Class. In 1962 he went to work for Baxter Laboratories, after leaving there, he worked for Carl Harkins Trucking, Dixie Gas, Ergon Gas and Scott Petroleum until his retirement. He was a member of the Sunflower Church of the Nazarene. James loved to tell jokes and make people laugh. He enjoyed bee keeping, fishing, radio controlled air planes, motorcycle riding, Delta State University Sports and gardening so that he may give vegetables to his friends and family. He was also the WABG TV 6 weather watcher for 25 years. James was a loving family man that gave of himself even while taking care of his wife after she became ill for several years. He also adored and loved his grandchildren and great grandchildren.
He was preceded in death by his parents and two brothers; Cedric and Haskell Winters.


To order memorial trees or send flowers to the family in memory of Mr James E Winters, please visit our flower store.