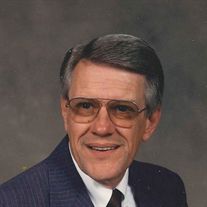 John was born on October 16, 1938 to John and Elizabeth (Covey) Walters, Sr. in Nairs Virginia. He graduated from Tomlinson Memorial School where he met Martha Lewis and on July 14, 1960 they married in Cleveland, MS. John moved his family to the Delta in 1963. He was a former manager for Cleveland Furniture Company and Defenbaugh Finance Company. After his retirement, John went to work at Ray Funeral Home, Cleveland Flower Shop and Cleveland Funeral Home. John was an avid gardener, enjoyed woodworking, arranging flowers and painting art. He was a people person who never met a stranger and greeted everyone with a smile. John also enjoyed listening to music and leading worship at church. He loved his family and most of all his grandchildren and great grandchildren. He was a member of Cleveland Church of God. John was preceded in death by his parents.

To order memorial trees or send flowers to the family in memory of Mr. John B Walters Jr, please visit our flower store.